Dynon Announces Out of This World STC Addition

Dynon is excited to announce the first expansion of its SkyView HDX Approved Model List STC to OV-100 series spacecraft. This achievement comes only weeks after the successful approval that allows SkyView HDX to be installed into many models of certified Cessna 172 aircraft.

After a weeks long refurbishment process that included the installation of a Dynon-designed VTOL-enabled, scramjet-assisted, Vibranium-powered hybrid propulsion system, Space Shuttle Enterprise launched from a floating platform just off of New York City’s Pier 84. Many New Yorkers in the area were reportedly unimpressed. On-orbit, Dynonauts proceeded with a complete check-out of its avionics and propulsion systems. 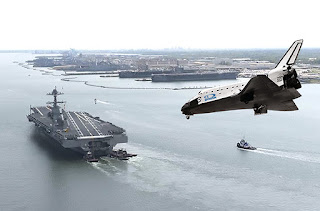 Following a full shakedown of SkyView HDX, the Dynon Autopilot commanded the vehicle to perform a re-entry burn, culminating in the first ever carrier-arrested, autopilot controlled autolanding on the deck of the USS Intrepid. Despite the record-breaking achievements, local New Yorkers were still reportedly unimpressed. The orbiter is now back on public display on the Intrepid.

John Torode, founder of Dynon said, “I always knew we were a bunch of space cadets. Boy, was that neat! What’s next?”

This is the second use of Dynon equipment in spacecraft: Dynon’s first space missions occurred over a decade ago, when a Dynon EFIS-D10 provided lightweight backup electronic flight instruments in SpaceShipOne’s multiple flights into space.
at 4/01/2018