Did You Know? Percent Power, the Dynon Way

The only thing worse in an airplane than no information is incorrect or misleading information. Unfortunately, engine percent power is one of those numbers that is often done more wrong than right.
At Dynon we are committed to doing things the right way, even when it takes more work than the easy way. The calculation of Percent power is no different. Calculating percent power with a computerized engine monitor requires a bunch of inputs. Take a look at the graph below for the power chart for a Lycoming O-360. It requires the user to look up altitude and RPM first, move over to Manifold Pressure (MAP), draw a line, then adjust for OAT with a formula. It’s a complex chart: perfect for a computer to crunch on but much too high a workload item for a pilot to do in flight. You can also see that it’s not something that can really be distilled into a simple table, though pilots have tried. 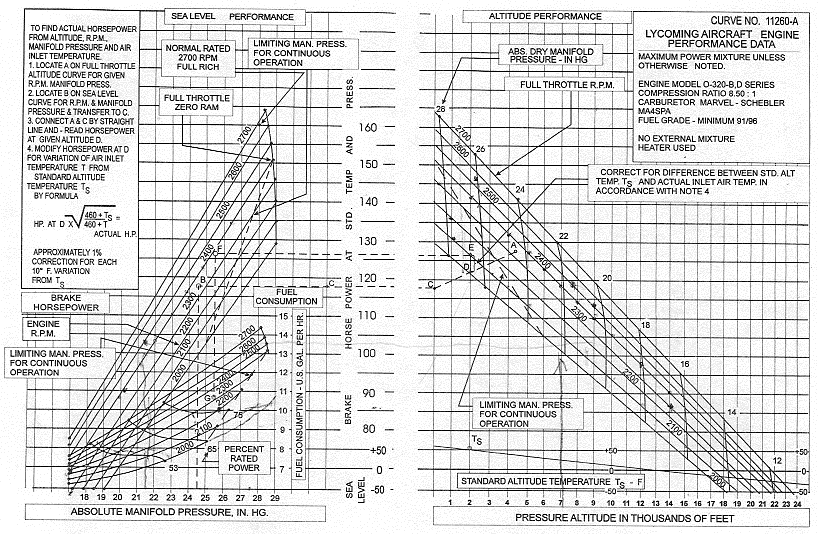 It’s important to know that Percent Power comes from more than just RPM and MAP. While those are the dominant inputs, altitude matters a tremendous amount as well. An engine does a lot of work to pull air into the cylinders, and while it may seem counter-intuitive, it requires less work to do this the higher you go, since the engine has less atmosphere to work against. Given the same MAP and RPM, the higher you are, the more power the engine produces. You can see this on the chart as about a 25% difference in percent power as you go from sea level to 14,000 feet. Another factor is OAT. We all know about density altitude and how it changes aircraft performance, and it does the same for the engine too. On a cold or hot day you could be off by up to 5% due to just the air temperature factor. So you can clearly see here that if don’t take OAT and altitude into account, you’re going to get completely wrong numbers. Of course, your Dynon won’t do that. All Dynon engine monitors that calculate percent power take into account all of the required elements and in fact won’t display a % power number unless all data is available. One interesting thing to understand about percent power is that because it is a percent of the max rated HP of the engine, not an absolute horsepower number, the horsepower rating of the engine doesn’t matter. If we could make a one cylinder engine from a Lycoming 360 jug, it would be at 75% power at exactly the same settings as a IO-720 because the 720 is just 8 of the same cylinder, each making 75% power. This also means that if we change our engine by raising or lowering compression, the calculation for percent power also doesn’t change.  The engine got more or less efficient at using fuel to make power, but it doesn’t change the percentages. If you’re so inclined, you can prove this to yourself by getting a couple different Lycoming charts for different engines and holding them all up to one another, and you’ll see that while the absolute HP numbers change, the percentages don’t. This is why in a Dynon system, you don’t need to enter a set of tables for your engine. Choose your engine type, and off you go. As a lot of pilots have found, running lean of peak is an excellent way to save money on fuel and decrease wear on your engine. But look at the chart further and you’ll notice something in the corner that sends a shiver down the data busses of all engine monitors tasked with calculating percent power. “Maximum Power Mixture Unless Otherwise Noted.” This is telling you that this percent power chart is totally worthless when you run leak of peak. But in fact, the only thing that matters when you are lean of peak is fuel flow. Now, most EMS units have fuel flow, but how do they know if you are rich-of-peak, or lean-of-peak? They don’t, but Dynon EMS units do. Dynon has a proprietary algorithm that can determine if you are running your engine rich, lean, or right at peak. This further means that we can automatically switch our calculation from the ROP table to the LOP table without any button pushing by the pilot. Other EMS units will just be completely off on their numbers when LOP, and LOP is one of the most important times to know percent power.

In the end, this means you can trust the percent power number on your Dynon engine monitor all the time. No worrying if you are LOP or ROP. No wondering if your EMS takes into account all the things it should. Just an accurate number on the screen, all the time. Simple, right, and the Dynon way. Ian Jordan
Chief Systems Architect P.S. If you don’t believe all of this, you can test it for yourself. Go up in your airplane and adjust for 70% power while ROP, at any RPM and MAP that gives you 70%. Note your indicated airspeed. Now change your RPM, and MAP to get back to 70% power, and let your IAS stabilize. It should be the same. Now, pull your mixture back to be LOP, and up your MAP to get back to 70% power. You got the same IAS again if you have a Dynon EMS. If you don’t have a Dynon EMS, your power didn’t appear to drop when you went LOP, but your IAS fell.
at 2/13/2014